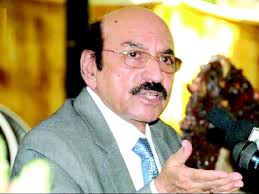 The Pakistan Peoples Party (PPP) has decided to make changes in Sindh cabinet and bring in a new chief minister for the province, replacing Syed Qaim Ali Shah.

According to a statement by party spokesperson Senator Farhatullah Babar, the decision was taken during a party meeting in Dubai on Sunday. While former President Asif Ali Zardari and PPP chairman Bilawal Bhutto Zardari were present in the meeting along with CM Shah.

Bilawal is scheduled to return to Karachi in the next few days to meet party MPAs before finalising changes in Sindh cabinet, statement forwarded to media.

It is said that Murad Ali Shah is going to replace Qaim Ali Shah as CM Sindh. Qaim Ali Shah became Sindh CM for the third time in 2013, it is high time to decide the time limitation even for the tenure of political designations. Nation looks highly depressed that all the decisions are made from Dubai.