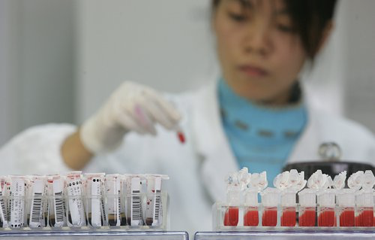 In 2017, an 80-year-old HIV-positive man underwent successful cardiac surgery at the Beijing-based Peking University People’s Hospital, under the recommendation of Professor Li Taisheng, the Director of the Infectious Diseases Department in the Peking Union Medical College Hospital (PUMCH).

As one of China’s leading researchers and a renowned clinical specialist in HIV, Li told the Global Times that HIV-positive people’s long term survival has become an important issue in China, now that the disease can be controlled and regulated as a chronic disease. “Now that HIV-infected people’s lives have been largely prolonged, we’re in a dilemma with regards to the treatment of its complications, since specialized infection hospitals are not capable of doing surgeries and patients with infectious diseases have to be treated in specialized infection hospitals,” said Li.

From lethal to chronic

Li announced proudly at a China-French medical seminar that AIDS has now become a chronic disease like high blood pressure and diabetes. An HIV patient can now survive for decades if he or she keeps taking medication.

Li worked at PUMCH as an intern in 1983 and became a doctor at the hospital the next year. In July 1985, PUMCH accepted China’s first HIV-positive patient. “A batch of patients died every couple of months, since there was no medicine for the disease in the world,” Li said. “Our hands were tied. We could only watch our patients die.”

At that time, fear of the fatal disease was overwhelming. “The fear came from the lack of medicine, ignorance of the disease and its 100 percent fatality rate,” Li explained.

Fu Yan, the head nurse at Beijing YouAn Hospital, recalled the fear that hung over the hospital when the first AIDS patient was admitted in 1990.

“Doctors and nurses never entered the patient’s ward, and a small window in the wall next to the door was used to take blood samples and pass food and daily supplies,” Fu said to the China Pictorial.

After the patient died, a pyre was built in an open space to incinerate every item the patient had used. “The inflammable things were wiped with disinfectant fluid and the isolated ward was steamed with peracetic acid,” Fu recalled.

On top of the harsh living conditions faced by HIV patients, medicine back then was hard to come by and expensive.

The five patients who made up the first group of HIV-positive patients to receive the therapy in 1998 are now leading normal lives.

However, the therapy was not accessible to everyone due to its high price and the scarcity of anti-viral drugs.

Li said that there was no free medicine for HIV-positive people in China until 2004, when China started to provide free testing, treatment and medicine for them.

In 2005, a nationwide AIDS clinic treatment network was established and Li became its president. Based on pilot tests across the country, Li discovered the most effective two medicine combinations that suited Chinese people’s constitutions and minimized their side effects.

“Over the past decade, I have been focusing on the effect of these free medicines on Chinese patients, including combinations and volume,” said Li. “Gradually, patients realized that China’s free medicine had the same effects as the imported medicines, and became willing to take them.”

Li also compiled the treatment experience and plans he obtained from the research into books, distributing to counties across the country via the network.

Along with the establishment of the network, a highly professional HIV clinical treatment and research team was also set up. Li said that “with the growing number of HIV-positive people in China, the team will play a more significant role.”

China began its research into generic anti-AIDS drugs in 2002. However, its homemade generic drugs caused severe side effects.

Li decided to do what he could to optimize China’s HIV treatment.

In the international community, Favirenz (EFV) was designed to contain 600 milligrams in a pill, and that standard had been used in European and American countries for the last few decades. However, Chinese people tended to suffer dizziness and hyperlipidemia after taking the medicine.

In 2015, Li found that the volume was too much for Chinese people, and that a more suitable content was 400mg. However, there were only existing production lines available for 50mg, 200mg and 600mg pills.

In 2017, a pharmaceutical factory based in Shanghai, East China, decided to help solve the problem by introducing a production line of 400mg EFV, and the medicine was approved at the beginning of 2018.

“There will be tens thousands of patients taking the medicine in the near future unless new medicine is developed,” Li said.

Zidovudine was found to prevent bone marrow formation six months after taking it, and Stavudine causes lipoatrophy up to one and a half years later.

A “shifting therapy” was then proposed, in which patients are given Zidovudine for five months before the side effects kick in, then shift to Stavudine. Six months later, they go back to the previous medicine.

While the treatment had the same positive effect, the side effects were dramatically reduced.

The therapy was then made available in the whole country, benefiting more than 20,000 people.

“With the side effects being minimized, patients are more willing to take the therapy, which helps to prolong their lives and improve quality of life,” said Li.

“Now that the survival problem of HIV-positive people has been solved, medical workers should now focus on how to give them better lives,” said Li. “AIDS patients should be treated like normal patients.”

In the clinic of PUMCH’s infections department, a growing number of AIDS patients come to treat their complications.

“One AIDS patient needed a coronary artery bypass grafting surgery, otherwise, he would have died soon. He turned to the specialized infections hospital only to be told they were not capable of doing the surgery,” Li told the Global Times.

“I begged the other department to do the surgery for my first patient,” said Li. The surgeon was scared the first time, and after accepting more patients, they became used to it, treating AIDS patients like normal ones.

In order to bring about normalized management for HIV patients, preparations are being made to set up a nationwide AIDS complication alliance. The alliance will serve as a platform for training, cooperation and clinical research.

The headline on Global Times newspaper: Lease of Life