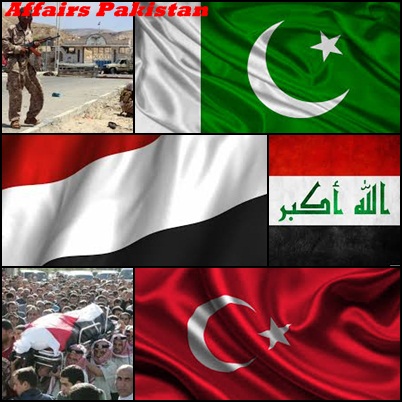 Terrorism has been linked by Taliban or ISIS from couple of years, but who is responsible for a spate of terror attacks across Muslim countries? Pakistan, Jordan, Yemen, Turkey, Saudi Arabia and Iraq are in a state of terror.

Pakistan: Pakistan’s law and order situations are changing but recently couple of days back Amjad Sabri a well known Qawal of Pakistan was brutally killed, whole Pakistan was bleeding on this worst incident. Reports have emerged that a political party is involved in this incident.

Jordan: At least six members of Jordan’s security forces were killed on 21 of June in a suicide car bombing launched from the Syrian side of the border. The car bombing, which Jordan’s government described as a “cowardly terrorist attack,” killed four border guards, a civil defence worker and a national security official, a military statement said.

Yemen: At least 42 people, mostly soldiers and one child, were killed when attackers launched four suicide car bombings at security targets in a major Yemeni city. The attacks occurred recently in Mukalla, a southeastern port city in Hadramaut province. At least 30 people were injured all security officers except for five civilians, according to the two officials, both of whom are in the provincial governor’s office. One of the attacks targeted a military compound near a government intelligence building. The others targeted military checkpoints.

Turkey: Terrorists stormed Istanbul’s Ataturk Airport recently, by killing 44 people and injuring hundreds. Reports have emerged that officials have said they believe the three attackers are from Russia, Uzbekistan and Kyrgyzstan, and entered Turkey a month ago from Syria’s ISIS stronghold of Raqqa.

Families had been gathering hours after they broke the fast for Ramadan and prepared for Eid al-Fitr — the day that marks the end of the holiday this week. As people congregated, shopped and watched soccer matches, the bomb-laden truck plowed into a building housing a coffee shop, stores and a gym. Firefighters rescued wounded and trapped people in adjacent buildings.

Saudi Arabia: Saudi Arabia endured a wave of suicide bombings over a 24-hour period ending Monday, a coordinated string of attacks analysts are linking to ISIS, while other sources claims this incident might be an action of Iraq’s extremist group.

The strikes occurred near the U.S Consulate in Jeddah, and a Mosque in Qatif. The holy city of Madina was also a target, the strikes failed in Jeddah and Qatif. Four people were killed in Madina. There has been no claim of responsibility yet.