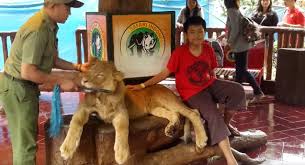 Lions are very aggressive creatures so humans can be in danger of being harmed, indeed they are one of the most beautiful animals on earth and are also known as big cats. Whenever i use to have a look at the images taken by my friends at taman safari desert, i would always wonder how come these lions are so calm and not attacking human beings. Human beings need to understand animals are not made to entertain them while keeping their lives in danger, the video leaked on social media of a sleepy lion is heart wrenching.

The above photo and the accompanying video below shows that this lion is either extremely tame and sleepy, or he may have been drugged before visitors posed with him for photos.

NGO Scorpion Wildlife Trade Monitoring Group took and uploaded the images from Taman Safari in Bogor on April 2. They believe there’s a possibility that the lion was drugged so that he can be more easily managed as a photo prop for paying visitors.

On their official website, Scorpion senior investigator Marison Guciano has asked the Natural Resources Conservation Agency (BKSDA) for assurance that the lion wasn’t drugged, though we have yet to hear a response from the agency.

Furthermore, Guciano noted that the lion shouldn’t have been used as a photo prop in the first place, when he said, “Scorpion calls on Taman Safari to stop this and other exploitation of wild animals. Zoos are not supposed to entertain visitors. They should be about conservation and education, I’m sure we all agree – don’t we?”

Before this story, Taman Safari Indonesia in Bogor was actually relatively free from controversy it has a reputation for being one of the most famous and well run animal conservation facilities in Indonesia, winning several national tourism and animal conservation awards. It would truly be a shame if they were found to be exploiting this lion and/or animals in the park.